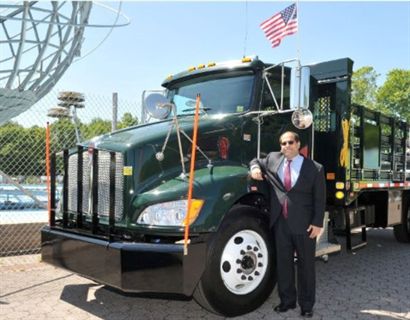 NEW YORK CITY - The New York City (NYC) Parks Department is working to green its fleet as part of a citywide goal to curb carbon dioxide by 30 percent by the year 2017.

"Sixty-four percent of our fleet of vehicles is already running on some sort of alternative fuel," said Keith Kerman, assistant commissioner for the NYC parks department. "Some are even all-electric, a few vehicles are solar powered, and many are CNG and hybrid powered. By the end of 2010, we're projected to be up to 72 percent."

The 2010 goal is being reached, in part, by the recent addition of Kenworth T370 diesel-electric hybrids. The City has been placing 17 Kenworth hybrids into service - eight with rack bodies and lift gates and the rest with 5-yard dump bodies. The trucks were purchased through Gabrielli Kenworth.

"The Kenworth T370 hybrids already in service are working great and preliminary results show we're reducing fuel consumption by up to 40 percent," said Kerman. "We'll have concrete results after a year, but we're very pleased with results to date. They're also great looking trucks - drivers love them, plus we are working on this in partnership with our sister agencies, especially Sanitation."

According to Kerman, New York City has the largest parks department in the country, encompassing 29,000 acres, divided up among 2,000 parks and more than 500 ball fields. The Kenworth T370 hybrid dump trucks are targeted to haul dirt, sand and clay to ball fields, as well as for general assignment work.

"The T370s with rack bodies are our do-all vehicle and can support a wide range of park activities - from pruning to general maintenance," said Kerman, noting the department finds the hybrids especially attractive since the fleet experiences a lot of stop-and-go activity with the vehicles.

"We want our vehicles to be role models for what government can do," said Kerman. "We view being a green fleet and an environmental advocate as one of our missions for the New York City Parks Department."