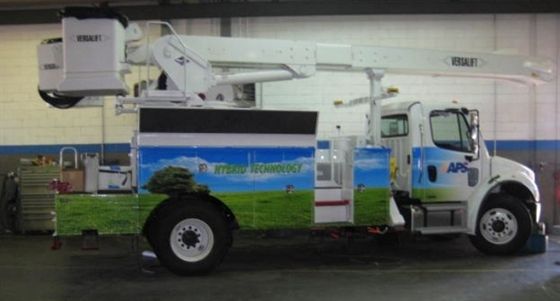 PHOENIX - Arizona Public Service Co. (APS), a subsidiary of Pinnacle West Capital Corp., plans to add more than 250 hybrid trucks to its fleet over the next 10 years, according to the company.

In late 2009, APS implemented a new standard of replacing its fleet vehicles with hybrid variations where economically applicable.

"The APS transportation department has been working on ways to lessen our impact on the environment for decades," said Jerry Olinski, APS Transportation Services Department leader. "In addition to adding new hybrid trucks to our fleet, we also use other sustainable actions in our operations as well - such as biodiesel, extended oil drains, and non-toxic solvents."

Since 1999, the company's diesel vehicles have been fueled by B-20 biodiesel - a blend of diesel and 20 percent oils, such as waste vegetable oil. In addition, about 90 percent of the antifreeze used by APS technicians is recycled, resulting in a reduction of more than 1,500 gallons of coolant used in the company's fleet over the past decade, according to APS.

APS is also a member of the Electric Utility Industry Sustainable Supply Chain Alliance, which promotes the development and improvement of industry standards and plans to develop supply chain practices that focus on environmental stewardship and also provide value for customers and shareholders.

Headquartered in Phoenix, APS is Arizona's largest and longest-serving electricity utility, serving about 1.1 million customers in 11 of the state's 15 counties, according to the company.