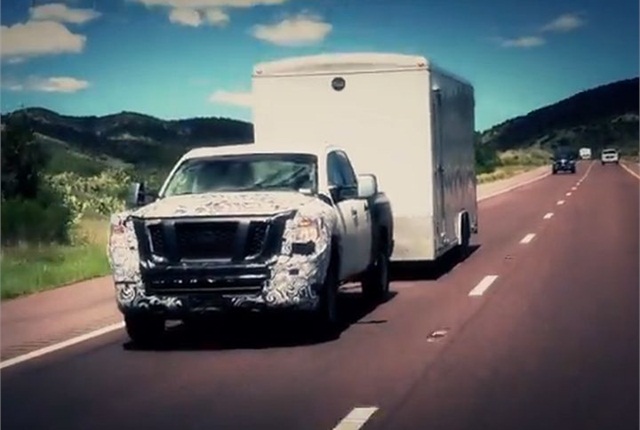 Nissan has launched a series of videos showing the development of the next generation Titan full-size pickup it plans to debut at the Detroit auto show in January with an optional diesel engine for the first time.

Nissan has posted the first installment of its Nissan Titan Truckumentary, and will release additional short video segments in December. The first video shows a camouflaged Titan and clips of engineers discussing the vehicle.

Nissan has revealed it will offer a 5.0-liter diesel V-8 from Cummins with the Titan that produces more than 300 hp and 500 lb.-ft. of torque. Nissan is expected to offer an additional, commercial version of the engine, which is being called the "ISV."

The Titan is still in its first generation, and has been produced since the 2004 model year.

The locations in Morgantown and Beckley, which both officially opened Jan. 2, were strategically selected due to local growth and increasing customer demand throughout the state.

Volvo Financial Services has invested in REIN, a insurtech start-up company, to deploy the next generation of connected insurance services to the commercial transport industry.

More than 100 companies have announced plans to introduce new commercial trucks, bodies, and truck equipment at The Work Truck Show 2020.

Loadsmart, a digital freight technology company, announced the addition of Jim Nicholson as vice president of carrier sales and operations.

The 20th anniversary of the annual Work Truck Show, held in Indianapolis March 3-6, features innovative new vehicles, products, and services. Here is a sampling to check out.

The 20th anniversary of the annual Work Truck Show, held in Indianapolis March 3-6, features innovative new vehicles, products, and services. Here is a sampling to check out

The parallels and warning signs of in truck management over the past 100 years have not changed as much as one might imagine.

Bestpass processed more than $1 billion in toll volume for the first time ever. In addition, the company hired 20 new employees.

The simulator will allow Ohio Department of Transportation to train new plow drivers with a realistic driving experience before snow hits the ground.